WHEN YOU NEED HELP AND INFORMATION
GO TO THIS PAGE

Notes from Council meeting in October 2020

Horsham District Council Emma Parkes and Guy Everest joined the Virtual Meeting to explain two White Papers that relate to Planning. The first White Paper is changing the way the target is set for housebuilding in Horsham (what is known as “standard methodology”). This uses a nationally set mathematical formula or algorithm. In the case of Horsham District, this formula results in a new target of 1,715 new homes every year. This is more than double HDC’s current target of 800 homes and is generally believed to be impossible to meet.

HDC Emma Parkes confirms that HDC has strongly challenged this new target. It is extremely high even in comparison to similar districts in West Sussex and the South East which have similar problems of affordability.

Consultation Paper 2 “Planning for the Future” contains initial proposals for a change in law. The Paper looks to fundamentally change the planning system in what would be the biggest reform since the system was first created in the 1940’s. More detailed information from the October Meeting will be posted on the website, forestnchorsham.org.uk on 17th November.

Stakeholders should shortly be shown the final edition of LCWIP which is scheduled to be presented to HDC Cabinet in November.

Until otherwise advised, future meetings will be taking place using Zoom video communication system. If you have any queries or concerns, please contact us by mail or email. We have every intention of carrying out our roles as much as possible!

IMPORTANT: Members of the public are usually welcomed at Neighbourhood Council Meetings which are held on the third Monday of each month (but usually the second Monday in December) in the Salvation Army Hall, Booth Way. However, due to the restrictions caused by the Covid-19 virus, we have had to make other arrangements.

Click the button to view minutes of recent meetings

We have councillor vacancies and will welcome enquiries about the councillor role from residents within the Forest Neighbourhood.

Whilst we are a non-statutory council, we are a voice for local matters and liaise with Horsham District Council.

What's on in the Horsham District?

to be safer on 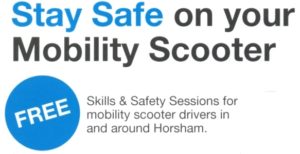 the information on staying safe